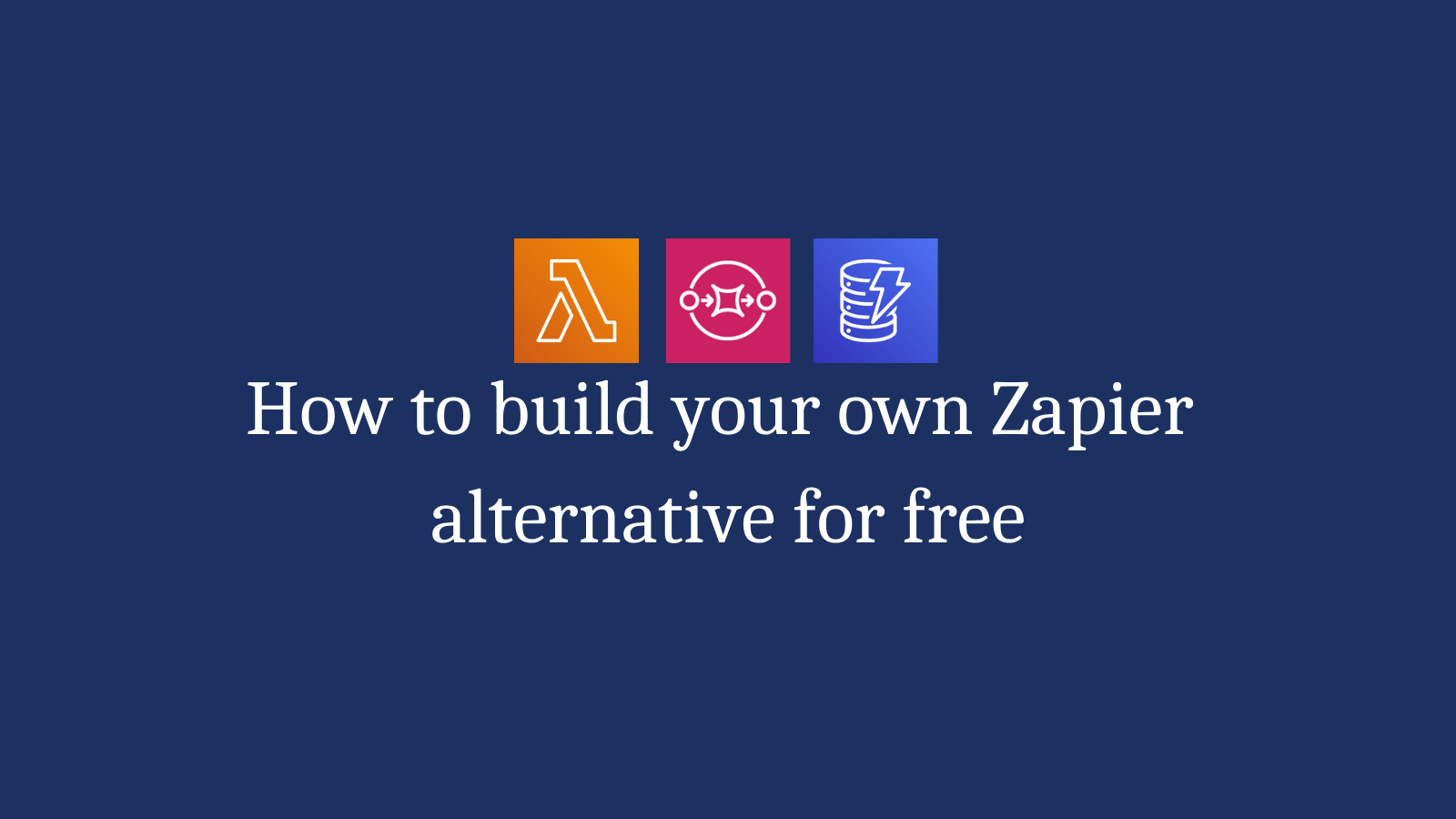 Zapier is a no-code workflow automation tool that can be used to integrate apps and make them work together. I have been using Zapier for a bunch of my side projects and it was been pretty useful to hook up services like Stripe with Gmail. However, I recently started hitting their free tier limits and started exploring the possibility of building a simple Zapier alternative, mostly for fun.

The requirements that I came up with :

The following section will provide an overview of the system based on the requirements we came up with.

What is a workflow?

A workflow can be defined as a Trigger and a series of actions that are taken as a result of the Trigger. The trigger can be based on webhooks or polling. 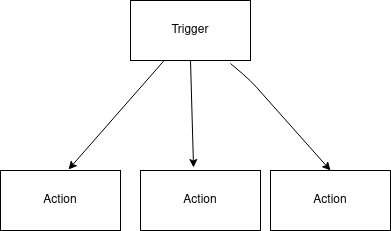 There are various ways to model a workflow. Some of the most common ones are:

To keep our system simple, we will define our workflows using JSON. JSON is natively supported in Python (my language of choice) along with many other programming languages.

What is a Trigger?

A trigger is the root node of a workflow. We will support two types of triggers in our system:

What is an Action?

An action is performed as a result of a workflow being triggered. We will support two types of actions in our system:

Receive a weekly newsletter with in-depth articles and tutorials about AWS. No spam ever.

Subscribers get cheatsheets and guides.

In the following section, we will take a look at the various services we will be using to build the system based on our requirements.

Since one of the main requirements for the system is to be serverless, we will leverage API Gateway and Lambda to support webhooks. API Gateway will create a single endpoint that we can use to send webhooks and we will do the filtering in our Lambda function.

Polling triggers are slightly more involved. The system comprises of the following parts:

We only want to execute our actions for the polling-based workflows when there is new data. To support this, we will use a de-duplication identifier similar to Zapier. We will use DynamoDB to store the identifiers we have already processed for a particular workflow. Since our data model is pretty straightforward, DynamoDB is a good fit for us.

Since we want to support workflows where a single trigger could lead to multiple actions, we will use SQS to decouple the trigger from the action.

Some of the benefits of this architecture are:

Now that we have a rough idea of how to build such a system, let’s look at what it will potentially cost us. I came up with a rough estimate of how this system would be used based on my current usage of Zapier:

Next, let’s look at the pricing of the various AWS services we are planning to use.

AWS Lambda has a pretty generous free tier which includes 1M free requests per month and 400,000 GB-seconds of compute time per month.

These are the Lambda functions that we currently have in the system:

Based on our previous assumptions of usage, the number of Lambda requests we would have every month are:

For the sake of simplicity, we can assume that our Lambda functions on average run for 30 seconds (probably much lower than this) and they take 1024 MB of memory.

Similar to Lambda, SQS also has a pretty generous free tier. The first 1 million monthly requests are free. Every API action counts as a request.

A rough estimate of the number of requests we would make to SQS are:

Based on the description above, the number of SQS requests we would make are:

Total number of requests to SQS in a month: ~5000 requests / month

The API Gateway will only be used by our webhooks workflows. Based on our assumptions above, we will make roughly 900 requests/month to our API Gateway. 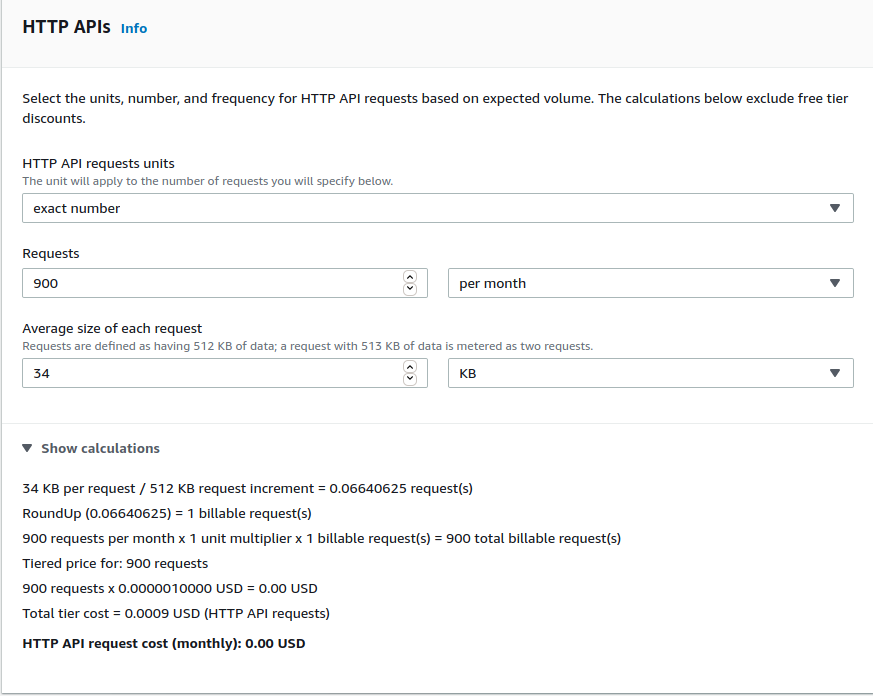 DynamoDB has the most complicated pricing model out of all the services we are planning to use. More details about pricing is available here.

We will be using DynamoDB only for polling-based workflows to ensure we can deduplicate any data.

The schema for our table would look like this:

Based on our usage model, we expect to make the following requests to DynamoDB:

I used this pricing calculator for DynamoDB and used conservative estimates that we calculated above. 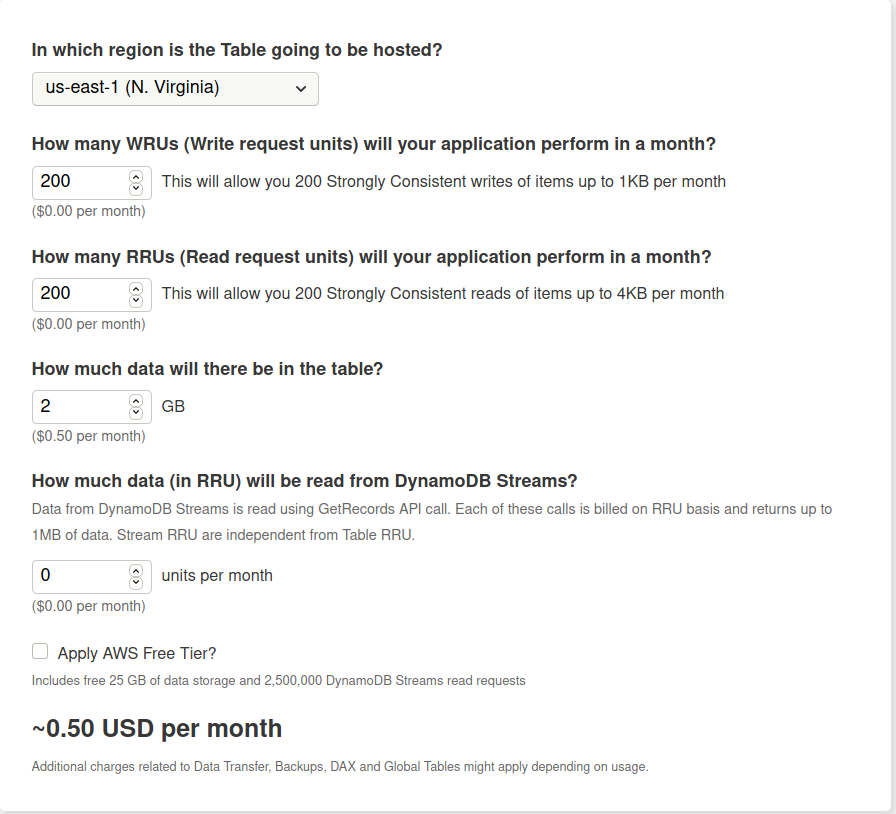 If we assume that we are within the limits of the free tier usage for Lambda and SQS, this system will cost us ~$0.50 / month.

This meets our requirement of the system being cheap to run and manage. We can probably handle a lot more workflows before cost will be a meaningful issue for us.

Now that we designed the system and also done a rough cost analysis and made sure that they adhere to our initial requirements, we can start writing some code to build the system.

The source code for the project is available at this repository.

Create a new directory for the application

Setup a virtualenv for the application

Create requirements.txt with all the dependencies

Run the following command in the shell to install all the dependencies.

The serverless-python-requirements plugin automatically bundles dependencies from requirements.txt and makes them available to your Lambda function.

We will create a new folder called workflows which will store the application logic. api.py contains the logic to handle webhooks whereas email.py provides the logic to interact with SES to send emails.

We will also create a file called handler.py in the root directory. This file will contain the lambda functions to run actions and handle polling-based workflows.

Let’s create a file named api.py under the workflows folder with the following contents:

We currently support email via SES as a downstream action. The contents of email.py are:

The email functionality is pretty straightforward. We send an email to the specified recipient and include the data we want.

Now, we need to handle any action that might have been enqueued as a result of the workflow being triggered. Our handler.py file would look like the following:

Setting up the serverless project

Next, let’s setup our serverless project config and deploy this project to test it out. First, create the file serverless.yml in your root directory and copy the following content:

Let’s create a new webhooks based workflow named test-webhooks.json under the workflows folder.

To deploy our project, we will run the following command:

Once the deployment is successful, we should be able to see the endpoint exposed by our webhooks server.

We will use this endpoint to make a curl request to trigger our workflow and check if we receive an email:

This is the email we received as part of the workflow:

Now that our webhooks based workflow is working as expected, we will go ahead and set up our polling-based workflows.

We will define our DynamoDB table based on the schema we specified earlier in the article. Create a file called models.py under the workflows folder.

Next, we will update handler.py to include additional lambda functions to handle polling-based workflows. The new functions would look like:

Next, we will update our serverless config to include permissions for DynamoDB as well setting up the new lambda functions to handle poll-based workflows.

We will create a polling-based workflow to retrieve new Covid-19 data using this api. This workflow will send us an email whenever new data is available.

Services like Lambda, SQS, & DynamoDB have made it pretty easy to build event-driven tools and this ended up being a pretty fun experiment for me. I have been using this new tool for the last couple of months to replace my Zapier usage and I haven’t run into any issues so far. The system itself is pretty straightforward and I have a few more ideas to extend it.